Adopted as the emblem of Samuel Jones & Co., a print merchant based near Southampton Way, in 1919, as a demonstration of the technique of printing multiple colours on a piece of paper, and prominently placed on their factory — too prominently perhaps, as it was said that German bombers used it as a landmark on their bombing raids during the second world war.

(The cottage in the foreground of the next photograph still stands on the corner of Southampton Way and Peckham Grove, so you can see where the factory once stood).

The firm moved out of the area and the factory was demolished in 1982, but the Camberwell Beauty survives today on the side of the Lynn AC Boxing Club building (formerly a public library and baths) on Wells Way.

Lynn AC is Britain’s oldest continuing amateur club, formed in ‘The Sausage, Potato and Onions Café’ in Borough High Street in 1892. They moved to their current premises in 1981 — just before the Samuel Jones factory was demolished, and so probably gaining the Camberwell Beauty as a welcome to the area.

Camberwell band The House of Love used a photo of the mosaic on the cover to their self-titled 1990 album. 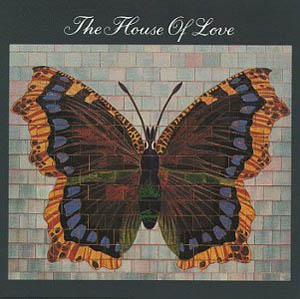 The butterfly continues to represent Camberwell, including at the entrances to Burgess Park.

And, of course, in the shopping parade, Butterfly Walk (and the Butterfly Pharmacy next door).

Samuel Jones & Co was integrated twice into other companies, but recently came back into business as a private company, Samuel Jones Ltd — and still with a butterfly logo (albeit a different butterfly).

The Camberwell Beauty is no longer found in Camberwell.

Thanks to Phil G for pointing out the The House of Love cover.

Long-time resident of Camberwell, author of this blog since July 2004. View all posts by Peter