I took a walk around the Green this morning and the sight of the Magistrates Court reminded me that I was going to write something about the proposal to move the library. As you may or may not know, Southwark Council have an 8,000 sq. ft. prefabricated building in Bermondsey which is now unused, and they’re considering moving it to the plaza in front of the Court and using it to house the library (currently on Church St.), a meeting space, and cafe. You can see the plans in this consultation document [PDF]. 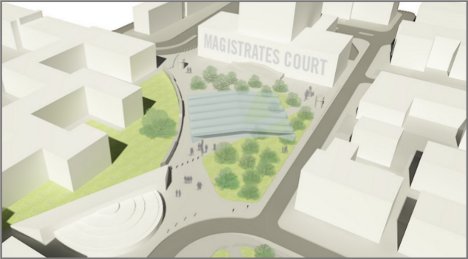 The Camberwell Society object to the proposal on the grounds that the building’s just too big; it would occupy most of the currently open plaza, making it very cramped, and involve cutting down some of the orchard (which they say is ‘becoming lovely’, although I’d dispute that) and some and nearby trees. Also, planning permission was granted only last year for children’s play resources and tree re-planting.

They say the move is likely to cost somewhere in the region of £500,000, and the building itself has an estimated life span of only 10 years, so would rather see the money spent on developing the existing library and meeting spaces in the leisure centre. There would also be costs involved in breaking the leases that are held on the current property.

I received an email from someone suspecting ‘ulterior motives’ for the Council’s proposal, and the author has some questions that they feel haven’t been answered, including:

Someone on this blog mentioned a Tesco opening in the current library’s position, but I’m not sure if that was any more than a joke or speculation.

I have to say that I’m not against this proposal if it brings benefits, but I agree that the proposal for meeting spaces and cafe could easily be met by funding the leisure centre, in which case moving the library doesn’t seem to make much sense.

The Council are running the public consultation until 21 April; download a copy [PDF] and fill in your responses if you’re interested in making your voice heard.

Long-time resident of Camberwell, author of this blog since July 2004. View all posts by Peter